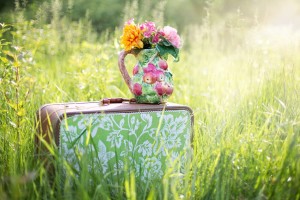 My grandmother was a formidable woman. She grew up on a farm near a river in the Free State in a time when a trip to church or school meant a 4-hour trek with a horse drawn cart, crossing dilapidated bridges and dangerous terrain. She could entertain me for hours on end with riveting tales from her youth and childhood.  Many people those days went through the same ordeals daily and thought it ordinary.  But that is not why she was special to me.

My grandmother was the person who taught me the meaning of unconditional love.  Never once in the 26 years I was privileged to have known her,  did I ever question her love for me. Her love for me was a gift that made me strong and gave me courage to face anything.

Being number five in a line of six kids,  I came 6 years after the first bunch of four,  and 11 years before the last blue-eyed girl.  By the time I was born, my four older siblings were all in school during the day and I was, for all purposes, an only child.  We lived on a farm so there were no neighbours’ kids dropping by or meeting new friends while playing in your front garden.

The highlight of my life was when Ouma Potch came to visit. We had two grandma’s named Hester,  so one became Ouma Cloete after her surname and Ouma Potch was promptly named after Potchefstroom, the town where she lived.  Her husband died the same year I was born,  so I only ever knew her as an independent,  strong woman,  coming and going as she pleases and never hankering after a grandpa to complete the picture.

From our front garden you could see the “big” road in the distance,  becoming visible over the horizon about 3 kilometres away.  On the joyous days of her arrival,  I would use my dad’s binoculars to keep diligent watch on the horizon, straining my eyes for the first sign of her white Ford Cortina.  Knowing I was there,  even without seeing me,  she started honking her horn al the way from the point she became visible, to the entrance of our farm! All those hours lying there on my tummy were worth it when I could finally run inside to inform my mum I was heading for the farm gate to meet my Grandma. I can still feel my absolute joy and excitement when I relive these moments.

During her visits, mornings were our special time.  I always crawled into bed with her and lay there in the crook of her arm,  waiting like royalty for my mom to bring us a tray of tea.  It seems strange that I can hardly remember anybody else being around,  though they must have been.  Such was the cocoon of our love.

Ouma Potch always went with us on our annual excursions to the sea,  during April, after the harvest.  For ten days we were in heaven. She would wake me up before dawn,  so we could watch the sunrise over the sea together.  While the rest of my family went about their business,  the two of us bonded even more in our common happy place.  I wish I had a picture of her with her homemade green and blue kaftan with matching wide-brimmed hat that was her uniform for our beach walks and shell foraging.  One year she decided to make the trip down to the coast by train, taking my cousin and I on an unforgettable journey that I am grateful for to this day.

One of the most amazing things about Ouma was her big green suitcase. It was a treasure chest with an endless supply of wonderful things that she unearthed at the most unexpected times.  Anything from a handmade ragdol to the most wonderful imported cheese wafers that melted like butter in your mouth.

During my pre-school years I often went to visit her in Potchefstroom.  These were the best times of all.  No distractions,  just the two of us and her very overweight ancient dog of questionable breeding,  Bassie.  My very first dog, a gorgeous little Toy Pom, was also a gift from her.  We named her Ogies, after her nickname for me,  Bruin Ogies (little brown eyes).

She played an important role in my development,  always being a constant beacon of love and strength and unwavering in her unconditional acceptance of me.  When I went through the usual teenager phase where I wore clothes that my mom thought was hideous,  grandma knitted me over-sized sweaters to my specifications. I still have some of those that I will treasure forever.

One of her qualities that endeared her to me was her wonderful sense of humour. She could make me giggle,  often in the most inappropriate situations.  If she didn’t pass us bunches of grapes under the table – with her toes! – while my father was saying grace,  she would place an extra large serving spoon at the visiting Minister’s table setting.  She once went to steal roses from the complex next to hers to place in our rooms on our visit,  and when the caretaker scolded her about it,  she pretended to be deaf! I bet her dancing eyes gave her away!

I’ve often wondered if she knew how much she meant to me,  because I can’t remember ever saying it out loud, but looking back over the years I’m sure she must have seen with those grey-blue eyes, her unconditional love reflected in mine.

I think the only person she loved almost as much as she loved me,  is my husband Willem, whom she approved of from the first moment she laid eyes on him. During our early married days,  we regularly went to visit her on Sundays in her old-aged home in Parys,  Free State. On such occasions, she cooked us a meal in her tiny kitchen with her old hands that must have taken her 3 days of preparation.  At that stage she had triumphed over breast cancer,  and grew tomatoes and potatoes in a “garden” that was smaller than my bedside table.  She once gave me a tiny bottle of apricot jam that she had cooked that week from a gift of 5 apricots that someone had given her.

In the end her heart could not keep up with her spirit.  She gradually became weaker and weaker,  until she eventually ended up in the frail care unit of the old aged home.  The day they inserted a catheter and took her dignity, Ouma Potch decided to die. From that day on she refused to eat or speak to anyone,  including my mother,  whom she loved dearly.

By that time our first daughter was born. When she was two months old we took the trip to visit her beloved great grandma.  Ouma was very weak by then,  but seeing the three of us with watery blue eyes, there next to her bed,  she whispered for the very last time,  telling me how beautiful our daughter was. A few weeks later her mind finally convinced her body to let go,  and she was gone.

Ouma Potch loved God throughout her life in a way that was proof that she couldn’t live without him. Never did I wonder where she got her strength from. Her Bible was a battered affair,  stuffed full of letters and photos and keepsakes,  almost every page thin with wear and full of lines and notes,  added by her during the years.

She is the only person I’ve ever felt contact with after death,  nothing super- spiritual or paranormal,  just a comforting feeling that she is there and she knows that I am okay and loved and she’s watching me through heaven’s eyes. 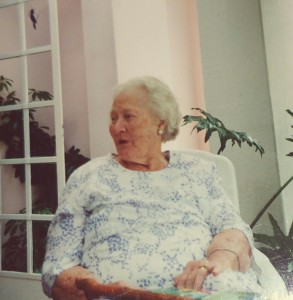 Photos by: Personal and Pixabay

Louise van Heerden is a wife and mother of four young women. She is determined to fill the approaching empty nest with friends, coffee, food, art and lots of long walks on the beaches of St Helena Bay where she is lucky enough to be living.