It was somewhere in High School, when I was still very much stuck in the grips of adolescence, when somebody told me that they think I should study to be a minister or pastor in a church.  I remember smiling inwardly, thinking of the amount of ice it would take to freeze over hell, before I even considered turning to Theology as a career.  “God knows, I should not be unleashed unto a church, they will not survive.”  Ten years after this conversation I was completing yet another degree in the Divine science and I had made quite a career out of it.  I wasn’t leading a flock yet, but I was certainly preparing to!

Already somewhere in my second year at Varsity, I exceeded in being slightly over dramatic.  I was building a career at University, so someone mentioned to me that if the Theology thing does not work out for me, I can always try my hand at teaching.  “Lord knows I would kill children and probably most of my colleagues.”  I was so focused on building my career and academic empire that teaching, especially at School level, was the last thing on my mind.

Today, to the date, it has been ten years since that conversation.  I have been teaching History and Afrikaans at a High School in KZN, South Africa for the past six months already.

The Lord God it seems, does know.  Or has an incredible sense of humour.

From High School to Varsity, from adolescence to adulthood, the path my life is on has changed so many times, that I sometimes hardly recognize 14 year old me, rebelling against Church and State, smoking a cigarette and reading Harry Potter.

I have gone from that, to working with primary school children at summer camps, to dancing on stages whilst touring the country, to studying the great Theological masters of our time.  I answered phones as the second assistant to the assistant, I was administrator for a corporate company’s website and then I had to take lead running a staff of 63 and a budget of 14 million, whilst proving that at the age of 27, I could hold my own, against people twice my age and with quadruple my experience.  I travelled the world, seeing places that very few would think of flying to, I made enough money to last me half a lifetime and I met the royalty of tertiary education on the planet today.

Life, at 31, has been full and it certainly has been interesting.  And not at all as I have, over the years, imagined it.

What has the last twenty years taught me?

Firstly, even though it certainly felt like I did and He didn’t, God knows.  He knows infinitely more than He lets on, but He will still allow me to make the decisions, even though the road will be of His choosing and not my own.  He will be there, all the way, whether I choose to see Him or not and my destination will always be better than the one I have left.  I have come to learn that God is in the traveling, almost more than He is in the destination.

Secondly, it really helped to accept that I will be travelling through life to reach many destinations, instead of just aiming for one and hoping to live there.  Nothing looks like I hoped it would when I was 14 and in almost all cases, it really is better than I imagined.  If I chose to stay with my nose in Harry Potter, I would have missed the beauty of a child smiling, the rush you get when there’s a standing ovation, the satisfaction of discovering something new whilst researching a topic for some paper.  I would have missed all this.  And it was not by a lack of trying to stay where I am.  I am to this day allergic to change.  But I am getting used to it.

Thirdly, and this I am borrowing from someone else, everything was/is/will be spiritual.  Not one move, not one event has been just for filling an empty paragraph in my story thus far.  I have been in positions where I knew the reason for something to change, way before I knew what that event would be, but I am also still wondering what the reasons were for stuff that had happened years ago.  I have made peace with my inability to understand most spiritual things, hopefully without stopping the search for understanding and meaning.  But more on that later…

Recently, my brother in law, who is going through his own career-like struggles, sent me the following: “Have I not commanded you?  Be strong and courageous.  Do not be afraid; do not be discouraged, for the Lord your God will be with you wherever you go” Joshua 1:9.

I found it profoundly true.  Not that I am not afraid or discouraged, I teach the history of the two world wars, one cannot help to be negative if that is the part of humanity’s legacy that you focus on.  But at least in some way I am not alone in this.  At least someone else chose the destination, even though I am the driver.

If at all possible I hope my next stop-over will be where I live on an island and own a helicopter, but God knows, He shouldn’t make me a millionaire… 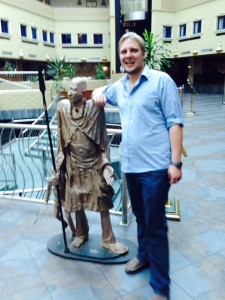 2014: Waiting at the Ugandan Airport after meeting with their Minister of Education on Distance Education in Africa.