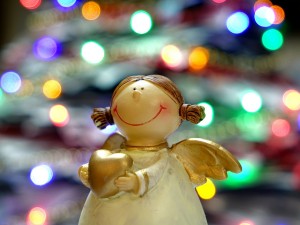 ……and sometimes He meets you at places in the form of angels on your path to help you up, keep you going and never let you give up.

When I had to go back to work after my four months maternity leave, we decided not to send Gian to play school yet, at the time we decided the best will be to get an au pair to look after him in the comfort of our home.

As I said in my post “Why me?” having an A+ personality, and being a first time mom, I read every baby magazine on the market. I knew exactly which milestones Gian had to master at what age. I even gave all the relevant articles to Gian’s au pair to study and she had to keep book of his day-to-day activities and keep a close eye on his milestones. He was our happy little super man! All his milestones were achieved on time!

Then, after his first birthday everything changed….he stopped eating….began struggling with his health, in and out of hospital, rota virus, pneumonia, tonsillitis, Coxsackie virus, all those bad things you read about in baby magazines. For me, as a working mom, it was bad. I was off work a lot while he was in hospital, and in an office environment, it was unacceptable, no matter what the reason.  I was so stressed about my job and more so about my child. When he got discharged and I had to leave him with his au pair, it was the hardest thing ever.

It was during this year that I began to realise, Gian was different. He was a very quiet little boy, not very social and preferred playing on his own. That magic sixth sense of a mother kicked in big time….as well as a lot of guilt as I was not there for him all the time.

I knew I had to make changes in my life to accommodate Gian. At the time I was pregnant with our second child as well. So I decided to scale down work, gave notice to our au pair and decided to put Gian in a play school to boost his social skills. A lot of changes to deal with….

Well, needless to say, Gian did not take the “going to school” so well. Every morning was a disaster, leaving him with a tantrum and me in tears. But Ouma San, the owner of his play group was great, an angel on our path. With all the love and support he got from her, Gian adapted easily. But that sixth sense did not want to leave me… something was up….although everyone told me not to worry, boys usually develop slower than girls…

One day at church, we ran into Gian’s Kindermuzik teacher. Annemie had a long chat with us. She suspected Gian has sensory difficulties as he covers his ears with his hands when the music starts playing. She is also a mom of a child with sensory integration difficulties and suggested that we take him to an occupational therapist for an assessment. Again an angel that crossed our path and planted the seed.

It was hard to believe that my sixth sense was actually right, but also difficult to digest especially now, being seven months pregnant. That Sunday afternoon, I had an appointment with Google. I had to know what this “Sensory” thing means and what to expect. This was also the day I found out Google is dangerous, I feared every condition which involves sensory integration problems, the one worse than the other… What are we in for?  Then I just prayed…. “Help me to overcome my fear, Lord, help me to be brave and strong to face this giant before me”

That following week our journey started with Elsie, Gian’s OT, an angel who became part of our journey for four years. With her professional guidance, we had huge breakthroughs in Gian’s development, but still Gian was not talking. When he turned three, Elsie referred us to another angel, Pauline, Gian’s speech therapist, whom we still walk the journey with. Pauline guided us in such a compassionate, loving and persistent way that Gian eventually began to talk. Both Elsie and Pauline were there for us, when Gian was diagnosed with autism, they encouraged us, gave us hope and helped us believe in Gian’s ability through this difficult time, something we will always treasure. Unfortunately Elsie relocated, but again the Lord provided, we were blessed with Petro, Gian’s current OT, and wow, what an angel with super sparkling wings, an angel who still encourages us, leads us and believes in Gian.

One bad thing of having a child, not mastering his milestones, is that all nursery schools turn you down, especially if your child is not potty trained at three. I almost gave up, but through my friend Marlene, I was referred to Gicarli. With a smile and a big heart Annelize took Gian in without hesitation or preconditions. And so, Gicarli, Annelize, and his teachers Juanita & especially Nikki became Gian’s guardian angles and led him with lots of love and support, to overcome a lot of obstacles and gave him the opportunity of normal school life, without feeling different.

After Gian was diagnosed, boy o boy, Jesus showered blessings upon us in the form of so many angels. One good thing about Google, it led me to SNAP (A school in Durbanville, who offered a program for autistic kids) and on their website, I ordered the best book ever, “A village of Hope” by Esme Brink. Esme became a friend of mine, another angel, who gave me hope through her own journey with her autistic son and still is one of my idols in life.

Through her I met Naleta and got Gian on the SNAP program, who again in one of my lowest moments led me to Marelie and Popcorn Kidz, to Celia, Betti, Saret. Through Betti, we met Christelle, who did a documentary about our journey on Radio Sonder Grense, an Afrikaans radio station. You can listen to the Afrikaans documentary here. Through Christelle, we met Ilze, who did an article about my husband Deon and Gian in the Rooi Rose. A whole snow ball effect of blessings in our life, through His amazing Grace.

And then lastly, our family and friends who walk beside us every step of the way, who encourage us, who complement us, who pray with us, who accepts and loves Gian. We appreciate you and thank God every second for blessing us with special angels like you along our way who lift us up, when our wings have trouble remembering how to fly.

For every fear that shakes your peace, for every night you feel alone, for every moment you lose a little hope, there is an angel who whispers: I am here….. 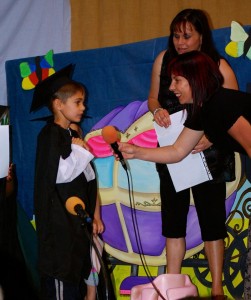 2013: Gian at his Pre-school Graduation with Teacher Nikki and Principal Annelize